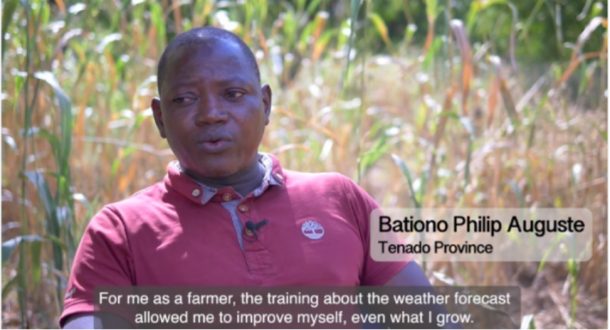 Countries contributing to the Climate Risk and Early Warning Systems (CREWS) Initiative have announced commitments for new investments of US$ 20 million for early warnings systems in Africa, and additional financing for the Caribbean region. The initiative has been widely lauded as a success story in terms of building resilience to extreme weather and saving lives and livelihoods.

Ms. Heike Henn, Director for Climate from the German Federal Ministry for Economic Cooperation and Development (BMZ) announced a new contribution of Euro 5 million to CREWS at a high-level event in the French Pavilion on 4 November.

Ms Henn stated that progress in forecasting and risk analysis of extreme events means that vulnerable countries can benefit from better early warning systems. These are most effective when they are integrated in disaster management and resilience strategies, noting the role of the insurance sector and the InsuResilience Global Partnership.

In 2020, 114 million people were better protected from disasters thanks to CREWS, said Jean Yves Le Drian, French Minister for Europe and Foreign Affairs in his opening of the ministerial-level event.

“CREWS is an example of what multilateralism should be about. It is a multilateralism of solidarity, which is reactive and very much grasping the challenges of our time,” said Mr Le Drian, who called for stronger joint commitments for early warning systems at the upcoming Global Platform for Disaster Risk Reduction, in Bali, Indonesia in May 2022.

Ministers from countries on the front line of the climate crisis, highlighted the importance of early warning systems and the work of CREWS partners, the World Meteorological Organization (WMO), the World Bank, the Global Facility for Disaster Reduction and Recovery (GFDRR) and the UN Office for Disaster Risk Reduction (UNDRR).

Minister of Environment of Burkina Faso, Siméon Sawadogo, reported that farmers are now listening to weather forecasts to better manage their crops, allowing them to know in advance if it is going to be a two- or three-month season and which seeds to choose and to plant.

Minister of Environment of Togo, Foli-Bazi Katari, stated that 70% of the population in Togo depend on farming. CREWS funding has improved flood prediction and early warning systems, protecting both lives and crops, he said.

Ms Tagaloa Cooper-Halo, Director at the Secretariat of the Pacific Regional Environment Programme (SPREP) presented concrete ways in which early warning systems underpin community resilience though CREWS in the Pacific region. “People in the Pacific are practitioners of traditional knowledge and climate change is altering the signals. The elders tell us that trees don’t talk anymore and we cannot have an effective early warning system that does not integrate traditional knowledge.”

She thanked the CREWS contributors for the support to early warning systems that meets the need of traditional people and listed examples of CREWS projects which have produced glossaries that converts traditional indicators into scientific explanations for the use of the local population in Pacific islands.

The importance of people-centred early warning systems has been stressed. At the CREWS Steering Committee held in the margins of COP26, member discussed new procedures to strengthen people-centered approaches in country operations. This requires working closely with institutions like the International Federation of Red Cross and Red Crescent Societies (IFRC) to ensure early warnings translate into early action.

Participants welcomed vision set-out in the CREWS Operational Plan 2021-2025, which provides the template for scaling up support to LDCs and SIDS for early warnings that are impact-based and people-centered.

Sameh Wahba, Global Director, Urban, Disaster Risk Management, Resilience and Land of the World Bank said, “Initiative such as CREWS have the opportunity to transform their USD 80 million worth of technical assistance, which is really important, into billions of dollars in the last mile early warning systems.”

He added that “the World Bank and GFDRR are prepared to continue working with CREWS to integrate early warning systems as part of the national development priorities, so one can have bigger impact and much more sustainable change on the ground”.